Back in the Paleozoic era, I played Pop-Warner football. I remember one game when I got my “bell rung”. The sophisticated first aid of the time was smelling salts and some weird pushing on your diaphragm to get you to breathe again. Executed by “the coach” who had comprehensive medical training which consisted of watching M*A*S*H reruns. It was probably a pretty good concussion (which may explain that strange twitch I still have) since I didn’t remember much after that. What I do remember was coach asking if I was hurt, or injured? I said I didn’t know, so he sat me on the bench for a few plays. He came over and conducted a thorough neurological exam by asking if I felt ready to go back in. I must have said yes, ’cause I played the rest of the game.

To this day, I’m still not entirely sure which is which. Do you go back in the game if you’re injured or hurt? I know that if there’s no pain, there’s no gain. Also, pain is just weakness leaving the body. So if I have pain someplace, I know it hurts but does it mean I’m injured? No, wait – I’m merely injured not hurt. But what if it ’tis only a flesh wound? I’m so confused.

What I do know is that these days something always hurts. The current inventory is as follows:

Anyone with more a few more brain cells than me would realize that at my age I should probably spend more time at the library rather than pretending father time doesn’t exist. Getting old sucks. I don’t remember having these issues when I was younger. We just went out and did things. No warm up. No stretching. No specialty hot-house yoga classes to focus our inner chi so we can properly concentrate on hydrating with our pomegranate energy drinks. We drank water. Or orange flavored Gatorade if you were lucky. We carried salt tablets when we went backpacking. I’m not sure what I was supposed to do with them, but I brought ’em every trip. 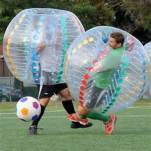 Apparently today kids can get a concussion simply riding their scooters into a strong headwind. It won’t be long before football disappears completely, replaced by hoards of young soccer players – encased head to toe in temperature controlled, memory foam suits and $2,000 cranial protective devices. Each player will be subjected to a 28 point neurological exam by the on-field physician and lawyer before being allowed to go home.

I miss the days of feeling young and invincible. Of not walking my bike around an obstacle but instead thinking, “I bet I could jump that. What could possibly go wrong?” You’re not going to get any extra credit points for meeting your maker with zero scars. Besides, what’s a few concussions here and there? I don’t drool that much. Now, where did I leave my car keys? I’m out of Doritos. 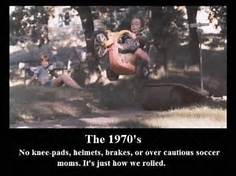