I received a little recognition the other day at work for being “compassionate and caring”. This was funny to me since that’s certainly not how I see myself, and probably not how others see me. I like guns, teasing fish with badly tied flies, the Darwin awards, and generally have limited tolerance for people who repeatedly make poor life choices. How could I pos 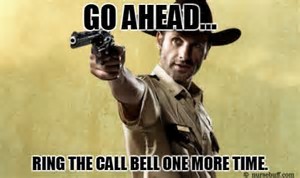 Being an RN has lead me down an interesting road of self discovery. I find that I’m becoming increasingly more caring towards people in need, and simultaneously far less tolerant of general asshatery and poor decision making. On my floor we see some pretty terrible things. Horrible car accidents resulting in brain injuries that aren’t recoverable, strokes, spinal injuries, brain tumors with poor outcomes, generally some of the worst days of peoples lives.

When dealing with these patients, you’re reminded of how lucky we are – and how fleeting our time here is. You never know what’s around the corner. I’ve been extremely fortunate and can’t imagine what it’s like to be in their shoes. If I can do something to make the brief time I’m with them better, I do it. It’s a side of me that I didn’t realize was there. It makes me feel good and hopefully eases their burden a tiny bit.

The other side of the coin has hardened me. The repeat drunks detoxing, chronic users sneaking drugs into their room and injecting into their IV lines, pe

ople who are convinced they’ve checked into the Fairmont hotel and expect to be waited upon, and the 400 pound patient on oxygen who’s eating a bag of Doritos and is pissed at me because I won’t help her waddle to the patio to smoke or give another dose of morphine.

For these people I’m rapidly losing my ability to feel sympathy. Life is short and you have a choice as to how you want to live it. Being a jerk is a choice. Treating others like crap is a choice. Making poor lifestyle choices… and then continuing to make them is a conscious decision. (Yes, I understand addiction and mental illness and its impact but a very large percentage of these folks are just generally not nice people) Knowing that the hospital and taxpayers will be dumping hundreds of thousands of dollars and days/weeks/months of care on someone who is going to check back in for the exact same thing before too long is hard to process sometimes. My compassion meter runs a little low some days.

I think that the reason I received that little nod at work is not because I’m Mr. Compassion, crying and empathizing with every patient who spilled their pumpkin spice latte, but because I treat everyone exactly the same. From the drug user to the VIP, I give the same care. As a patient, you’ll never know what my inside voice is saying. I think the trick to longevity in this job is finding an outlet so that inside voice stays inside.

As the old saying goes, don’t be a jerk to the person fixing your food, cleaning your hotel room, or caring for you at the hospital. You never know when their inside voice might become their outside voice.

Quick – what is the NFL-anthem-kneeling debacle about? What do they want?  I’d be willing to bet that most folks only have a vague sense that it’s about some sort of injustice, maybe the first amendment, or because Trump said something.

Colin Kaepernick, who liked to take the field wearing pigs as cops socks, said this: “I am not going to stand up to show pride in a flag for a country that oppresses black people

and people of color. … There are bodies in the street and people getting paid leave and getting away with murder”. If you’ve been supportive of Kaepernick and the kneeling movement, is this really what you feel? If you do, great. More power to you, stand up for your convictions. Otherwise, are you supporting something only because it’s popular? Don’t want to be the only one who didn’t hit the “Like” button?

Protest all you want. You have that right. Just realize that if you choose to do it on your employers time… there may be repercussions. I know that my employer won’t be thrilled if I choose to march around and protest the plight of the endangered snowy plover while at work. Just ask Mr. Kaepernick. He may feel some satisfaction in seeing his actions briefly becoming a bit of a movement, but he’s still sitting home in his pajamas on Sunday without a paycheck.

How many people are praising the protest because they agree that cops are pigs and this country is a bastion of oppression, or are they joining the bandwagon because it’s popular on the Facebook? I think there’s a special irony in folks who are in the top 1% of wage earners, protesting the evils of virtually the only country on this planet where you can earn wheelbarrows full of cash to run around and catch a ball. They have every right to do so. And the free market has every right to react. The current 2017 Chicago murder count is 539. Primarily gang/drug related and black on black crime. Yo, oppressed NFL players – where’s the protest and call for action on that?

Symbolic protests have their place. They have the ability to spark a movement that can achieve change. That can be a good thing. But to be effective they have to have a clearly identifiable injustice and an outcome that everyone understands. To me, the kneeling thing has neither. Therefore it’s stupid, pointless, and will only hurt the NFL brand. Ultimately the players are doing more harm to themselves over something that will be completely forgotten several years from now.

My poorly thought out point is that as you’re doing a cut-n-paste of some clever meme to your Facebook page, do you really understand and support the protest du jour, or are you simply being a herd animal? I’d suggest you be a little bit of a skeptic before you hit that Like button. As the saying goes, reserve your f**ks for things worth giving a f**k about.