Watching the violent snowflake outrage in Berkley over thoughts that don’t match their group-think, I was reminded of a recent conversation Mrs. Troutdog and I had about maturity. We were talking about kids being able to safely walk/ride their bikes to school and she said “…but he’s only in middle school”.

I’m not a parent, which of course makes me perfectly qualified to pass judgement on parenting styles. I’m also not the most adventurous person in the world and tend to be pretty cautious most of the time. But this one time way back in the stone age I was twelve, about to turn thirteen. I wrote a letter (gasp, no email?) and applied to a summer camp I found in the back of Sunset magazine. I got the job, got on a Greyhound bus in Northern California and traveled down to San Diego alone. Spent the entire summer as a camp counselor and lifeguard.

Now this was not particularly extreme and I’m sure many of you who grew up in the mid-west were probably even more independent. I think most of today’s younger generation parents would be horrified at the idea of putting a twelve year old on a bus to travel 800 miles away, alone. Practically grounds for a child abuse lawsuit. (9 year old on the subway ) A year later at thirteen, a friend and I loaded up backpacks and rode our bikes 30+ miles to a lake and camped for three days. No cell phones, no way for our parents to know if we were alive or had been snatched by an evil clown. Today, a child of thirteen walking (or Uber) to the store to pick up a gallon of milk will be required to check in by phone three times and the parents will be monitoring their real-time progress via an app.

Ignoring “extreme” travel, how many parents today would be comfortable with their twelve year old riding their bike around at 4am every day delivering newspapers in the dark?  (what’s a newspaper?) How else was I supposed to afford baseball cards and movies? Today’s kids get allowance for backbreaking chores like “keeping their room clean” or “taking out the trash”.

We’re raising a generation that isn’t particularly rugged and is frightened of everything. Is it any surprise that people in the U.S. are outraged at everything today? Give your kids the chance to be more self-reliant and independent – they’ll thank you for it in the long run.

The following information may be considered… oversharing. Should I ever run for political office, I’m sure this will be used as part of a vicious smear campaign. That being said, I find it interesting that something we’ve managed to do for thousands of years has become so complicated. That something is pooping. Specifically, pooping in the woods. The modern outhouse and toilet paper (or “bathroom tissue” as it’s known so as not to offend anyone) is a relatively modern invention. In a short span of time, modern society has become horrified at the idea of dropping trou in the outdoors and letting ‘er rip. I know people that when confronted this situation will become instant poop camels and hold it in for the better part of a week to avoid exposing one’s buttocks to the breeze.

This is not me. My intestines run like the German train system. Orderly, on-time, and on a precise schedule. It’s all good unless that schedule is interrupted. If the trains get backed up, anarchy and chaos soon follow. The unhappy commuters rapidly begin to send more and more urgent messages that the trains need to get back on schedule ASAP. Trust me, we like to keep the trains running on time.

Which brings me to the woods. I’m not one of those folks opposed to pooping in the

woods. It can be downright peaceful at times. There are of course the positional challenges. Leaning against a tree, lean back holding on to a tree, sitting over a log, or the traditional squat and hope your aim avoids the trousers bunched up around the ankles. There are times the Scottish kilt in the backcountry has its advantages. As fascinating as all this may be, it is not my point. My point is snakes.

If you know me, you’d know that I have an unnatural fear and adversarial relationship with snakes. This wouldn’t be a problem if I was a librarian, but unfortunately I like the outdoors. Snakes have a tendency to live in the outdoors. This is an issue. Which brings me to my latest encounter. I recently got back from a long river trip to a remote area that, coincidently, is infested with rattlesnakes. Even though snake fears kept me from getting out of the boat unless absolutely necessary, I was having a great time until midway through the trip. After unloading all the gear and getting camp ready, I sat down in my chair to enjoy an adult beverage when I heard something in the grass. A large snake slithered by, not six inches from my foot. My river mates commented that I have an impressive vertical leap for someone my age. A little girl scream may or may not have been uttered, but that detail will stay on the river.

Which brings me back to my original point. As I sat in my tent that night, refusing to come out for dinner, it dawned on me that if I wanted to keep the trains on schedule I was going to have to wander through the snake infested grass and rocks first thing in the morning.

Faced with two undesirable choices, keeping the trains on schedule or being chased by snakes, there was little sleep that night. I made the only choice a rational person would make – I went into camel mode. No coffee, no breakfast, little water. Thank god I’ve been diligent with the ab machine. The cramping became bearable after a while. Major fist-bump to the ladies if this is what the monthly visitor is like.

The fatal mistake came on the second evening of operation anhalten der Deutsche Bahn. Succumbing to hunger pangs, I ate one of those freeze-dried backpacker meals. While they may be tasty going down, they impart a certain… urgency to the train schedule. Early that next morning, with a pounding heart and clenched cheeks, I made my way into the woods to perform a ritual our ancestors have done for thousands of years. Who knew my heart rate could sustain 200 bpm for so long? Fortunately for me this story has a happy ending. Like a Christmas morning miracle there were no snakes and the trains were back on schedule. It’s rumored I may have had a skip to my step when exiting the woods.

My point? As usual, I’ve forgotten. Maybe it’s that snake chaps are a real thing. And that I own a pair. Now to figure out how to wear them with the outdoor kilt. Under or over?

[Upon opening the Well of the Souls and peering down]
Sallah: Indy, why does the floor move?
Indiana: Give me your torch.
[Indy takes the torch and drops it in]
Indiana: Snakes. Why’d it have to be snakes?
Sallah: Asps… very dangerous. You go first.

I done visited me some places in my life. More than some, considerably less than many. I seen me the Rooster Days parade in Broken Arrow Oklahoma. I drove past that big arch thingy in St. Louis. I spent a day once in Mendota California. On purpose. I spent a drunken afternoon betting on Jai Alai in Tijuana once. Y’all may want to put those on your bucket lists.

Mrs. Trout and I got to talking and the subject of travel came up. She asked where would I want to go for a big bucket list vacation? Interestingly it turns out, I don’t know. I’ve never actually put any real thought into it. Trips, vacations, countries, and adventures have just sorta happened… I don’t have a big list that I’m checking things off of. So I decided it’s time to create that master list and start working through it before I get run over by a cement truck.

Turns out, making that list is harder than I thought it would be. I actually got somewhat overwhelmed. Are we talking about big budget, six months of planning, once in a lifetime trips? Maybe it’s the quick weekend dash to see the Myrtle Beach Elvis fe 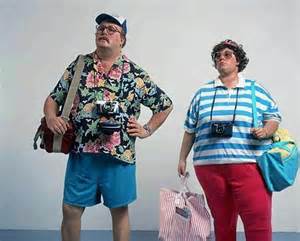 stival? Worldwide or U.S. only? Lazy sit on a secluded beach (would have to get in banana hammock shape for that one) or trek the Himalayas? Pampered all-inclusive resort or someplace that might not be so safe for a camo baseball hat, Bermuda shorts, fanny pack wearing U.S. of A good ‘ole boy? Culture and museums or party my brains out (well, until 10pm, I go to bed early) on a beach somewhere in Phuket?

Once you pick a place, how do you see it? Organized tour? Frantically hit every tourist spot you can since you’ll never be back? Ignore the tourism and stay in one spot like a local?

There’s just too much out there. I’m paralyzed. What if I choose wrong? What if I can’t find a Taco Bell? I may have to binge-watch No Reservations for ideas. Or Bear Grylls. Nah, too scary. I may just stick to every season of Diners, Drive-in’s, and Dives. Eating my way across the country seems like a worthy bucket list goal. I’m going to keep working on this list. Check back with me in a while to see how it’s going. Odd’s are I’ll still be staring at a screen with approximately 1,232 browser tabs open, all pointing to various top-50, must-see lists. Or I’ll have been sidetracked with epic dog fail videos.